Yesterday was not a good day for Chesapeake Energy and its CEO Aubrey McClendon. By the end of the day, Chesapeake’s stock had slide to its lowest since September 2009, down 15 percent at $16.72 (see chart below). Why the drop? A number of reasons, but mostly because of a new revelation, “the other shoe dropping.”

On an earnings call with stockholders and analysts yesterday, McClendon laid out a plan for reducing a pile of debt the company has racked up that now totals $12.6 billion. Investors remain nervous about the mounting debt. The company earlier this week reported a net loss of $71 million, or 11 cents per share, for the first three months of this year. Several weeks ago Reuters reported that McClendon had been running up his own debt tab in order to supply cash for drilling wells in which he is a 2.5 percent stakeholder in a deal with the company. The company’s stock took a beating on that news.

Then, just a few days ago, the Chesapeake board of directors announced they would end the special deal that allows McClendon to participate in ownership of company wells, and they also removed him as chairman of the board of directors.

And all of that can all be considered the “good news” after a new revelation yesterday.

Reuters has done more digging and found that McClendon had been running a private $200 million hedge fund from at least 2004 to 2008. A hedge fund is an investment fund, a big pool of money, that is managed and invested usually in a specific industry or sector. The fund, Heritage Management Company LLC, was started by McClendon and Chesapeake co-founder Tom Ward. The fund traded in natural gas commodities, the very thing produced by Chesapeake. And according to the Reuters report, McClendon was very active in directing the trades, sometimes calling multiple times per day to guide the trading of the fund.

There’s no indication that the fund or McClendon did anything to undermine or “bid against” the best interests of Chesapeake—but the problem is, he could have. And that’s what doesn’t sit well with regulators, investors and analysts. It is the possibility, the potential that he might make decisions as CEO of Chesapeake that would benefit himself to the expense of shareholders.

"An executive’s first responsibility is to shareholders and the betterment of their investment," said Carl Holland, who ran the trading-compliance department at former U.S. oil major Texaco. "Personal trading in the commodity around which the CEO’s business is based would be a clear no. We would never have tolerated that, ever."

Thomas Mulholland, a risk-management consultant to oil and gas producers for Golden Energy Services in St Louis, said such matters are "taken very seriously by energy companies, and there are strict codes against it. Even if there is just a whiff of impropriety," he said, "it can be enough to lead to a termination."

The commodities markets are less regulated than equity markets, where corporate executives are prohibited from trading stock in their own companies based on undisclosed financial information. In commodities markets, insider trading isn’t illegal unless price manipulation can be proven.

Nonetheless, personal dealing in energy markets is typically forbidden by oil and gas companies for a variety of reasons.

In Chesapeake’s case, McClendon would have been aware of major decisions that could affect natural gas prices before that information became public. Accounting for 5 percent of U.S. natural gas production, Chesapeake holds tremendous sway over markets. On January 23, the company announced sharp output curbs in response to low prices. In response, U.S. natural gas futures surged by 8 percent the same day.

"If the company needs to make an operating decision which might move the market against the CEO’s positions, there’s a risk that will influence the decision-making at the top of the company," said Jeff Harris, former chief economist at the market’s U.S. regulator, the Commodity Futures Trading Commission, and now professor of finance at Syracuse University.*

McClendon is keeping a brave face and apologized to those on the call yesterday for the “distractions” of the past few weeks, saying:

"Your mother told you not to believe everything you read or hear for good reason, and that’s certainly been the case for the past two weeks.”(2)

Although the company took on more debt in the first quarter, McClendon maintains Chesapeake’s drilling program has an expanding set of oil reserves and no operational problems: 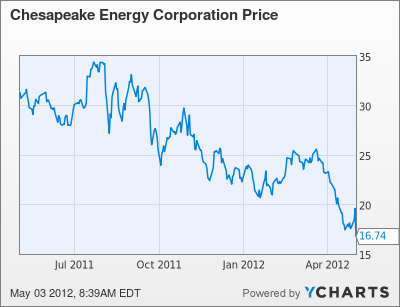