Chesapeake Energy’s credit rating was downgraded by Standard & Poor’s to BB-, which is defined as, “Less vulnerable in the near-term but faces major ongoing uncertainties to adverse business, financial and economic conditions.” The downgrade caused the stock to tumble to its lowest point since March 2009.

Chesapeake shares dropped more than 6 percent to the lowest level since March 2009.

The credit ratings agency believes that Chesapeake will struggle to generate enough cash to pay off its debts as natural gas prices plunge. Standard & Poor’s also noted that the "mounting turmoil" from CEO Aubrey McClendon’s personal financial dealings could make it tougher for the company to raise money in the future.

Chesapeake, like other petroleum companies, saw revenues sink this year as natural gas prices tumbled to a 10-year low. It’s working to produce more profitable crude oil and liquid hydrocarbons, but the shift is costly and risky for a company with high debt.* 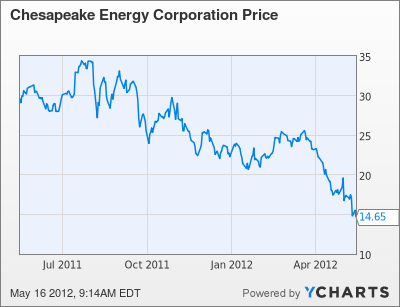