Chesapeake Energy, in a bid to keep the company from being sold, has caved to demands from its two largest shareholders to replace half of its board of directors. Investment firm Southeastern Asset Management, which holds 13.6% of Chesapeake stock, and corporate raider Carl Ichan, who didn’t own any Chesapeake stock a month ago but now owns 7.6%, have been very vocally challenging the company and calling for changes at the board level. Raider Carl will be one of those new board members—either him or someone he designates. The other three new board members will be appointed by Southeastern.

The new board members will be elected at the company’s annual meeting in Oklahoma City this Friday. But that leaves four members of the board still devoted to founder Aubrey McClendon. A divided board? Perhaps the tie-breaker will be a new and as-yet-unnamed chairman of the board—the ninth member of the board. That person will be selected by the other board members.

In addition to new faces on the board, the other huge change coming is that all board members, including these four new members, will be approved by majority voting of shareholders. Previously, only board candidates first approved by a nominating committee could be voted on. That will change on Friday.

Below is the official press release from Chesapeake, which is all peaches and cream. Don’t be fooled. You can be sure the directors exiting stage left, along with Aubrey McClendon, are not happy campers this week.

In connection with Chesapeake’s 2012 Annual Meeting of Shareholders scheduled to be held on June 8, 2012, the Board of Directors has determined that if the amendment to Chesapeake’s bylaws to implement majority voting in director elections is approved by Chesapeake shareholders, it will be immediately implemented and applied to the results of the 2012 Annual Meeting. The Board will also seek relief from the Oklahoma statute mandating classified boards of directors for certain Oklahoma incorporated public companies so that shareholders will have the opportunity to elect the entire board of directors at the 2013 Annual Meeting of Shareholders.

Merrill A. (“Pete”) Miller, Jr., Chesapeake’s Lead Independent Director and President and Chief Executive Officer of National Oilwell Varco, said, “We are pleased to announce these important actions taken by the Board in consultation with our two largest shareholders to further enhance Chesapeake’s corporate governance for the benefit of all shareholders. We greatly appreciate the substantial contributions of all of our directors, but recognize our shareholders’ desire for change. Following implementation of these initiatives, the Chesapeake Board will have been substantially reconstituted with five new independent directors, including a new independent chairman, in addition to Lou Simpson who joined the Board last year.”

Aubrey K. McClendon, Chesapeake’s Chief Executive Officer, said, “Today’s announcement is the culmination of a continuing effort by Chesapeake’s Board to address shareholder concerns and better position the Company for the future. I am fully supportive of these measures and remain focused on executing Chesapeake’s strategy. I have great respect for the talent, commitment and dedication of our current Board members, each of whom has played a key role in helping build our successful company. At the same time, I look forward to working with our new directors to continue creating substantial shareholder value from the extraordinary set of assets Chesapeake has acquired and developed in recent years.”

O. Mason Hawkins, Chairman and Chief Executive Officer of Southeastern Asset Management, the Company’s largest shareholder, said, “We are pleased that Chesapeake is being responsive to issues raised by us and many of the Company’s other shareholders. These steps to reconstitute the Board will enhance oversight and provide greater accountability.”

Carl C. Icahn, Chesapeake’s second largest shareholder, said, “We appreciate the Board’s willingness to listen to shareholders and to respond appropriately. Under Aubrey’s leadership, Chesapeake has assembled great assets and I am confident I can help the Company create significant shareholder value from these assets. We enjoyed a very good relationship when I acquired almost 6% of the Company’s stock in late 2010 and I look forward to a similarly constructive relationship now.”*

The stock market responded positively to the coming changes—Chesapeake’s stock closed up over 6% on Monday after the changes were announced. 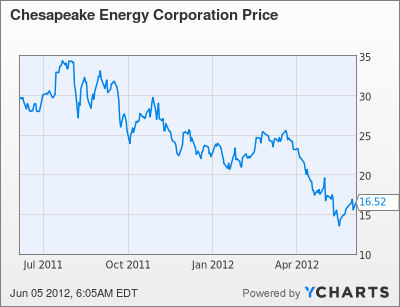