MDN friend Victor Furman is a man on a mission. Vic is a New York landowner and a “shale gas activist” working with the Joint Landowners Coalition of New York (JLCNY). Vic is also co-host of the JLCNY’s JLC United Good News Table Talk Radio Show. Vic is passionate about restoring New Yorkers’ Constitutional rights to allow shale drilling. Vic’s latest project: He’s going to make a shale gas documentary–without the help of HBO and its liberal backers. Instead, Vic needs some help from pro-shale gas supporters. He’s going to travel to states that allow shale drilling and film the people who live close to it, telling their stories and reporting what he sees. As Vic says, he’ll report it all, “good, bad or indifferent.” Here’s the low down on Vic’s effort to get the truth out about shale drilling…

The following is from the Natural Gas Now blog site (highly recommended reading!):

Vic Furman is the kind of man who jumps in to make things happen when others are afraid or too tentative. Now he’s planning his own fracking documentary!

My story is shared by thousands of other Upstate New Yorkers who live in the Southern Tier of the Empire State and have been denied the right to lease their land by our bully governor and his blatantly political decision and ban on drilling, based on fractivist peer-reviewed junk science and other misinformation. I am determined to do something about it.

Like many areas of the United States our area is in economic blight. We also under siege by people paid to protest, falsly declaring climate change is why we should be denied our constitutional right to drill for natural gas. Yet, 35 other states are drilling for natural gas and fracking, using their natural gas to actually reduce carbon emissions. 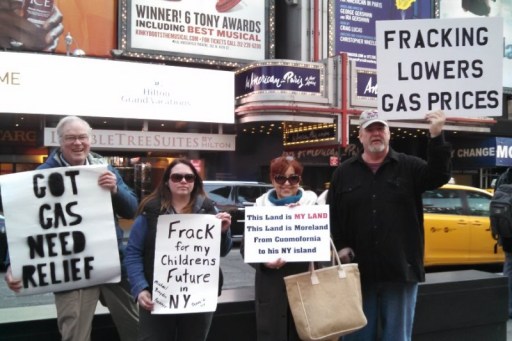 My plan is to travel to those states to video tape and record the drilling operations and local reactions whether they be good, bad or indifferent. I want to give voice to and document the voices of those ordinary people who live where drilling takes place, as well as visit each state’s enviromental department and interview those involved with regulating the drilling industry.

I need your help.

I already purchased an RV for the six month long trip and have a video team who will travel and record with me.  The end result will be a fracking documentary of the trip, interviews and input – both good and bad – from those most impacted to help educate our governor on the gas and oil industry from a source other then industry itself.

Please help me make this possible. Those of you who are readers of my posts here at NaturalGasNOW.org or who have listened to me on the radio know exactly how I will approach this and it will be grass roots in a way no other such project has ever attempted. You can help by giving what you can at the GoFundMe fund-raising site I’ve set up here.